It is twenty four years since Channel 4’s “The Manageress” first aired. For two series, Cherie Lunghi played the boss of a struggling professional football team, trying to convince people that her tactics and methods were valid in the male dominated world of professional football. Two years later the BBC broadcast the drama “Born Kicking”, imagining how a female footballer would cope playing alongside men at the top level. That was in the 1990s, before the Premier League made footballers ‘sexy’ but still the only route many women see into the top levels of sport is as a WAG on the arm of a rich footballer.

Football is the national sport in Britain but women struggle to gain acceptance within the game and to match the coverage men get for doing effectively the same thing. Whilst female presence in stadiums has grown, women trying to play a role in the game have been ceremonially dismissed. Female referees have been ridiculed and patronised by Sky TV pundits and the thought of a woman managing a team, let alone playing alongside men, isn’t going to become reality anytime soon. If FIFA (who today have three female members on the executive committee) had their way women would play the game in ‘figure hugging outfits’, a proposal which only highlights the problem.

Whilst women’s international tournaments receive coverage and the BBC give time to the Women’s Super League (WSL) finding analysis or even fixture lists in the ocean of football content is difficult. The women’s game has provided incident, England’s failure to compete at the highest level has been compared to the similar problems of the men and saw an end to the reign of long term manager Hope Powell. Domestically, there has been controversy with the famous Doncaster Belles demoted from the WSL in favour of a struggling yet commercially viable Manchester City side whilst Lincoln Ladies face a rebrand and move to Nottingham. The commercial behemoth that has swamped football looms large over the women’s game.Whilst women struggle to compete directly against ‘stronger’ men in contact sports, there is still a differential in non-contact games between the sexes. When Michelle Wie took to the men’s professional golf circuit it was major news and a positive step but she failed to compete at the top level leading to suggestions that her inclusion was merely a sponsors gimic. In 1973 retired tennis pro Bobby Riggs, then 55, claimed he could beat any woman in the world which provoked controversy. Riggs comprehensively beat world number one Margaret Court but, when Billy Jean King took up the challenge, the match received huge publicity. The “Battle of The Sexes” and her eventual victory became legend and the subject of a 2013 documentary but it took still took until 2007 for women to compete for equal prize money at Wimbledon. 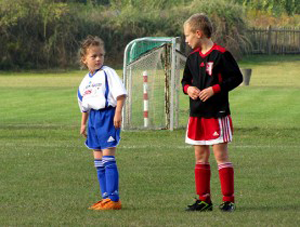 men’s higher strength a natural, evolutionary fact? Top female athletes are almost always defined as too masculine or considered to be on steroids, athlete Caster Semenya was cruelly ridiculed and mocked after undergoing sex confirmation tests. Muscular or strong women are considered to be ‘unfeminine’ and the cultural pressures out on girls to look thin and attractive may put them off taking part in competitive activities which is a historic problem afflicting all walks of life. It wasn’t until 1928 that women were allowed to compete in athletic events at the Olympics and even then it was a highly controversial change, against the wishes of the games founder Pierre De Coubertan who thought their presence “impractical, uninteresting, unaesthetic, and incorrect.”

Snooker and darts are an integral part of the British pub culture, yet women still struggle to compete with men despite strength playing a minimal role. A well respected snooker official once told me that the reason women can’t compete is because “their bodies don’t fit the table”. With attitudes like that at the top of the game, women will always find it difficult to break down the barriers. Mind sports such as poker, bridge and chess have mixed competitions at the highest level yet they are still male dominated. EPT champion Victoria Coren’s experience in the World Series Of Poker show the pitfalls of having specifically women only events but also highlight the cultural problems women face in a man’s world.

Perhaps one day a women’s track and field world record will surpass the men’s equivalent or women’s events will be seen as equal rather than as an aside to the male version. Perhaps female athletes won’t feel pressured to aim for a certain body type. Perhaps, to be considered at the top of their game, they won’t be asked to pose provocatively for male attention and then denigrated by the same media outlets. Instead of John Inverdale suggesting the Wimbledon champion “was never going to be a looker” wouldn’t it be nice to think that women can be top class athletes in their own right and not just there to be lusted over by a predominantly male audience? Women have risen to the top of the worlds of the arts, politics and science and maybe one day a woman will regularly manage top football teams or compete equally. As long as women are judged on their aesthetic rather than athletic merits, this still seems a long way off.

← Social Media & Web Content Intern
The future of equality – Are we becoming too comfortable? →